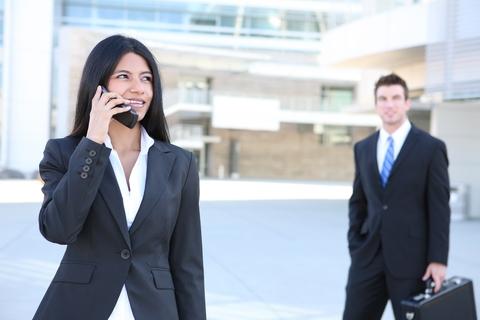 The STORY:
“Okay, Ted,” said Larry into the phone, “I appreciate your letting me know that Bob scheduled a repair.  Sure, I made notes on the other three you called me about earlier.  Bye.”  He put the phone down and called up Bob’s record on his laptop.  Ah, thought Larry to himself, Bob got the mid-line model a year ago . . . just about the right time for the first repair.  Let’s see, his number is . . .

“Hi, this is Larry Saunders at Sunrise, need to get in touch with Bob regarding the repair of his unit.  Voice-mail?  No, need to speak with him directly.  Thanks.”

“Bob, it’s Larry Saunders regarding the repair you scheduled,” said Larry, waiting for Bob to speak.

“You’re fast, I just called no more than an hour ago and spoke to Ted.  Is there going to be a problem?”

“No problem on this end.  That’s not my concern.  Here’s my concern, with this unit down, where does that leave you?”

“Hey, I really appreciate that.  Turns out we’re slow this week, thank God, and we’ll be pinched, but not bleeding.”

“You sure?  I don’t want to hang up and find out a month from now you feel like you were left in the lurch.”

“No, not a problem.  But now that you mention it, the thought crossed my mind that this might be the beginning of the end for this size unit.  Hell, if it had gone down two weeks ago, it would have been a real disaster.”

“Is there anything you’d like to do about that disaster before it happens?”

“Why don’t we meet tomorrow . . . or is that too soon for you?  Maybe we ought to do something before I throw money into repairing.”

“Let’s catch breakfast at the diner, at seven,” responded Larry.

“You’re buying,” said Bob.  “Hell, if you put enough bacon into me, and I’ll get that bigger unit like you suggested last year.  See you then.”

Larry hung up the phone and made a note to have a pizza delivered to Ted and his crew.

The RESULT:
Larry maintains regular contact with all of his customers especially when they are most vulnerable to buying elsewhere.  Larry also has the highest repeat customer record in the company.

DISCUSSION:
Salespeople, as a group, resist calling customers who have just had a repair completed on something they sold.  There is even more salesperson resistance to calling the customer just prior to the time the repair is made.

They believe that the customer will be angry or negative regarding the product.  In actuality, if the customer is negative, and there is no reason to assume he will be, it has to do with the inconvenience of the product breaking.  Customers know nothing lasts forever.

Read that last line again.  Nothing lasts forever.  The customer has just had this thought go through his mind.  You aren’t the only one who can sell this product which just broke.  The customer knows who your competitors are.  “Sure,” your customer thinks, “they will probably be able to fix it.  I wonder if Harry’s company makes a more reliable model.  Maybe I should call Harry.  After all, what have I got to lose”?

What happens if Harry is invited in and nods that “Yes, ours doesn’t break as often?”  Your customer hasn’t even heard from you.  What do you think happens next?

APPROACH:
In order to completely solve a customer’s repair problem, you need to do two things.  First, and most obvious, whatever is broken needs to be made right.  Second, and not so obvious, is to ensure that the customer is not deciding to actively become someone else’s prospect.  You need to repair the emotional damage.

All you have to do is contact the customer and ask, “Is there a problem?  Did we fix it?”

If the physical problem still exists, then you really need to do something fast.  By making the call, you still have a chance to repair the relationship between you and the buyer.  Do what you have to do, to get the problem solved.

If the physical problem has been solved, you still need to repair the emotional relationship between you and the customer.  You cannot assume the relationship is still good.  As you saw in the story, the customer was convinced that the repair signaled the beginning of the search for a replacement.  If Larry hadn’t called, what reason would the customer have to call him?  After all, Larry sold him a product that broke.

THOUGHT:
If you don’t solve both customer repair problems, the actual and emotional, there are tons of other salespeople ready to do the job and take your commission.