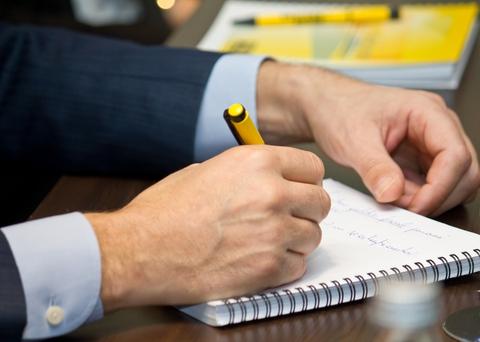 The STORY:
Last Thursday, Nick was idly thumbing through his Rolodex of clients. During the past two years, he had amassed many, and for the past three months, unlike before, his sales had been going down. Not by a lot, but enough for him to wonder, at one o’clock in the morning, what was going on.

Here’s the Laterza account, he thought to himself. Noted on the card were the dates of the sales he had made and the dollar amounts. Odd, he thought, for the first year there were seven sales running about $4,000 apiece. Now it’s June and since January, only two sales, one for $1,500 and the most recent for $800. Probably the economy, he decided. I’ll give Laterza a call next week.

Three weeks later Nick happened to be driving by Laterza’s office and decided what the heck, since he had never called, he might as well show the flag and stop in.

As he walked into the reception area, the shock of seeing Ms. Laterza walking out of her office with his competition, with a smile on her face even, was most unsettling.

“Oh, Nick,” she responded, “Jim and I were just talking about what my needs were down the road.”

“Nick, you have a moment?” she asked, standing in her office doorway.

“Just stopped by to see how you were doing.”

“Nick, you should have done that three months ago. I haven’t come to any decision yet with Jim’s company, but we have made some tentative plans. Where have you been?”

A little annoyance crept into her voice. “You may have been Nick, but my business doesn’t work in a vacuum. You should have called.”

“Was it the quality of work we did?” he asked.

“Not at all. Your work was always first rate. But I can’t make money living in the past. I’ll give you a call.” And with that, she shut the door.

The RESULT:
Nick blew this one. He let his competitor move into his client’s future. Now Nick has a former client because the client doesn’t see Nick taking care of her in the future. Granted, his competitor hasn’t made the sale. Or has he?

DISCUSSION:
Prospects, or for that matter clients, don’t suddenly decide one morning to wait by the phone for salespeople to call. And then when one does, with the product they happen to want, buy it.

Prospects and clients also don’t live in a vacuum between your sales calls. This may sound obvious, but many salespeople fall prey to the concept that “Jones will never buy from anyone else but me.” Unless you are the only person in the world making the product or offering the service, your client is approached at least once a week.

Between television, the radio, the newspaper, fellow employees, their banker, the direct mail solicitations in the in-basket, on-line computer services, and a dozen more, your prospects and clients are being asked to buy from someone besides you.

Prospects and clients, despite how strange it may sound, can also think you live in a vacuum. Their perception becomes, “When I need it, I’ll call.” You know they probably won’t, but that’s what they say to themselves.

Do you really want to entrust your earnings to someone who may or may not call you when he needs something?

APPROACH:
There is a way for both you and your prospect/client to avoid believing the other lives in a vacuum. Just very few use it.

All you have to do, on a regular basis, is take his pulse. This is not a sales call. This is a “taking the pulse call.” Ask him when and why he bought the product last. Even if you think you know the answer. Then ask what need it solved. Now ask the same thing for the future but in this fashion—“Will the same need(s) exist in the future?”

You now have the information you need to retake his pulse down the road. “The last time we talked, you mentioned a need, (fill in the need), is it still a need?”

THOUGHT:
Knowing where your client is, future and past, tells you where your prospect is in the present.