Sandler Brief: Know When To Ask A Question

May 25, 2017 by Peak Performance Management in Sales Process 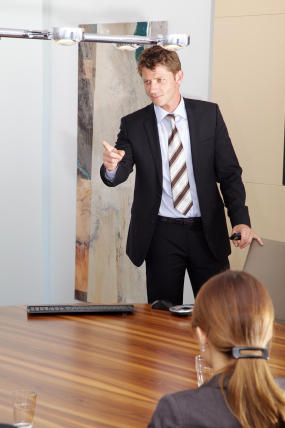 June is Effective Communications Month. With that fact in mind, consider the following cautionary tale for salespeople.

Will, a new salesperson, had just begun a face-to-face meeting with Maria, the CEO of a big company that Will’s manager would have dearly loved Will to close. Right after the two sat down in Maria’s conference room, Maria asked:

No sooner did Will hear those words than he embarked on a long monologue about all the research he did to prepare for this meeting. It’s quite a speech. In fact, it takes him about ten minutes to cover everything. If he’d been watching Maria a little more closely, he’d have noticed her eyes beginning to glaze over at about the fourth minute.

The meeting went downhill from there. A face-to-face session Will had hoped would run for an hour or more concluded just twenty minutes into the discussion. He never really connected with Maria, and heard through the grapevine, later that week, that he had lost the opportunity to a competitor.

During a debrief with his manager, Will explained what had happened at the opening of the meeting. That’s when his manager posed a question Will hadn’t considered: “Do you think the meeting might have gone better if you’d asked her why she was asking you that question?”

Every time a prospect asks you a question during a sales call, it’s highly likely that you’ve got an opportunity to improve the relationship by asking your own question . . . instead of answering the prospect’s question directly. This is a basic communication principle that too many salespeople overlook.

To improve communications and avoid misinterpreting the intent of prospects’ questions or the meaning of their answers to your questions, David Sandler recommended that you ask for clarification. For example, a prospect like Maria may ask, “How much do you know about my company?”That may be a “smoke-screen” question to determine if you’ve done your homework before calling on her. Or (as was actually the case during Will’s meeting) the person may simply be eager to tell you about her company — how she took it over when her father retired and how she doubled its revenue in three years. By depriving Maria of the opportunity to “take a turn” in the conversation, Will missed an opportunity to deepen the relationship.

What Is the Intent?

Wouldn’t it be nice to know the actual reasons behind a prospect’s question before you tried to answer it?

To simply ask prospects for the motive behind their questions, however, may be a bit too abrupt. To avoid being perceived as confrontational, you must soften your question by preceding it with an appropriately named softening statement.

Prospect: Have you done work for any of my competitors?

Salesperson: That’s a very interesting question. (Followed by a clarifying question.) Why do you ask?

The softening statement, “That’s a very interesting question,” allows you to ease into the clarification question.

Other softening statements include:

I’m glad you asked me that.

Many people ask me that.

I haven’t been asked that question for quite a while.

David Sandler called this strategy of responding to prospects’ smoke-screen questions (or any question for which the meaning or intent is unclear) with your own questions “reversing” because doing so reverses the flow of information—from prospects to you, rather than from you to the prospects.

In almost all cases, when you apply the reversing strategy, prospects will reword or expand their question to reveal the motive behind it. It may take more than one reversing question, however, to fully expose the real question.

Some classic reversing questions include:

Why do you ask?

Why is that important?(And that’s important because…?)

What are you hoping I’ll tell you?

Why did you bring that up just now?

What are you really asking?

Will’s manager used a series of role-plays to help Will get better at reversing prospect questions during sales calls. As a result, Will delivered fewer monologues, made stronger person-to-person connections with the people he was meeting with, and improved his communication skills … and his closing ratio. June is a great month for you to start doing the same!