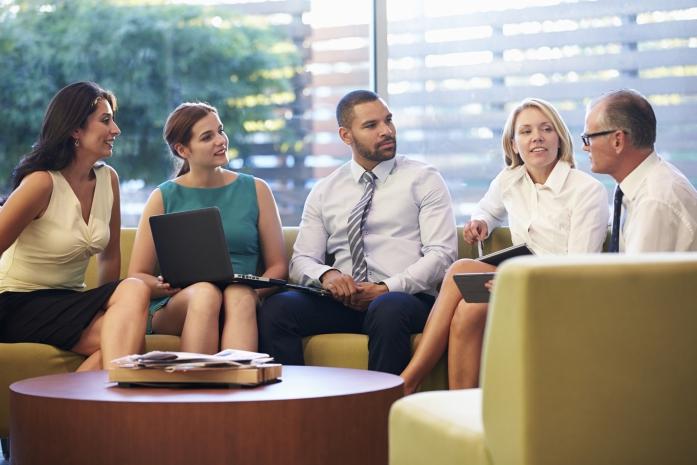 The STORY:
Anthony was really on a roll with his presentation to the committee.  As he spoke, he looked around the table and decided, based on facial expressions, statements, and body language, that nine of the ten members liked what they were hearing.

The one hold-out, Sharon, was sitting directly opposite him.  Throughout the entire presentation, though she gave the appearance of being comfortable, Anthony had a sense that she was in-over-her-head.  In order to ensure that everyone understands just how well-engineered Anthony’s product was, part of his presentation had become very technical.  If it were not for all the engineering courses I have taken, he thought to himself, I wouldn’t have understood myself either.

“So,” said Anthony, “at this point does anyone have any concerns with what’s been discussed?”  He looked around the table seeing nods indicating understanding, except for Sharon.  In the back of his mind, a little voice was telling him to not confront Sharon, but the more he thought about it, if she didn’t “get on board,” this sale just might get flushed.

“Sharon,” started Anthony, “I can’t help but sense that perhaps there is something that just hasn’t settled right for you.  Is that the case?”

“Well,” replied Sharon, “I did get a little confused about just how your model will integrate into our unit.”

Ah, thought Anthony, I was right.  “Sharon, I think it’s important you understand.  Let me . . .” and he proceeded to spend the next five minutes going over once again the technical aspects with Sharon as his focus.

“So, it does appear that you feel more comfortable with the integration of my product . . . yes?”

“Good,” said Anthony, “now I’d like to move on to how my company would provide the models on a just-in-time-inventory shipping schedule.  Any unanswered questions before I do that?”

Anthony glanced at everyone, then at Sharon.  While she no longer seemed lost, Anthony now sensed that she was annoyed.  Got to keep moving, he thought and began discussing shipping schedules.

The RESULT:
Anthony, though thoughtful and concerned, had put Sharon in a bad light from Sharon’s point of view.  The first chance she gets, she’ll kill the sale.

DISCUSSION:
Some salespeople love group presentations because it allows them to “trot out” all the goodies that have been created to wow the audience.  These salespeople suffer the disease of “ringing bells and blowing whistles.”

In the rush to give a good performance, the only perception the salesperson has is whether or not he is getting through to the group members.  If nine heads nod yes, but the tenth doesn’t, the urge to focus on the tenth becomes too much to resist.

The need to convert—not understand, but convert—that tenth person becomes paramount in his mind.  What do I have to do?  Ask that one person what’s the roadblock and then get rid of it.  If the other nine can see how right this is, why can’t she?  I have to rescue that person from her ignorance so I can make the sale.

However, the moment you save that person, you lose that person and most likely the sale as well.

In saving the person, you obligated her to return the favor in the presence of her peers.  She’s now in an untenable position.  If she favors the sale, she will think others view her positive view as a way to “pay you back.”  And, in fact, that is exactly what the others may think. Thus it is less of a risk for her to help kill the sale since then the others cannot accuse her of favoritism.  Either position is uncomfortable for the rescued person.

Think back on the times where you made a group presentation and rescued someone during the presentation.  Did any of those times result in sales?

APPROACH:
Never be the rescuer in a group presentation, no matter how tempting.  Delegate the role of rescuer to some other member of the group.  Delegate by recruiting them to do the job.

“Sam, earlier you said ‘the timing sequence on the switch is precisely what is needed,’ could you go back over that?  I think both Sharon and I need to know how you arrived at that conclusion.”

“I can appreciate that you’re not sure of the next step, Sharon.  Ellie made an interesting point a few moments ago.  Ellie, could you expand a bit on what you meant when you said . . .”

Involve the group to do the rescue mission.

THOUGHT:
Is your job to sell or rescue?  Which one makes you money?