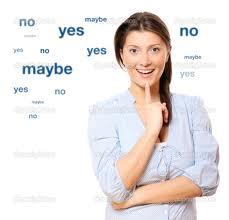 Nothing kicks you in the stomach like these words. You know it’s a ploy. The prospect’s blocking, putting up a barrier, throwing you back.Indecisive prospects. Who hasn’t dealt with them?  Everything seems to move along during your sales call, and a prospect nods positive with everything you have to say. And just when you think he or she will be a breeze to close, you hear, “Let me think about.”

But it’s OK. You might respond with, “I understand. Would you mind sharing with me what you might have to think about?” But even that may not move your prospect to come clear about what’s holding him or her back from committing.

Your best bet may be to agree and then get the prospect to agree to a clearly defined next step—to OK a next appointment to explain the thinking behind the ruse to delay a decision.

But whatever a prospect’s buying style, keep this in mind: Prospects behave indecisively for two, key reasons:

First: Your behaviors are likely indecisive. Stop focusing on what to do about prospect indecisiveness. You can’t change that. But you can change your less-than-decisive behaviors to decisiveness ones.

You’re prospects mirror neurons will pick up, however unconsciously, on your behaviors. If you behave indecisively, your prospect will likely mirror your indecisive behavior.

John Rosso is recognized nationally as a business-development expert, specializing in executive-sales consulting and sales-productivity training as well as the best-selling author of Prospect- The Sandler Way. John is a dynamic, enthusiastic speaker who informs, entertains, and motivates presidents, CEO's, other senior managers and sales professionals. In 1994, John founded Peak Performance Management, Inc. an authorized Sandler Training Center. His track record speaks for itself, as he has helped thousands of executives, managers, and sales professionals triumph over the challenges that inhibit their success and take their sales to the next level.